Join Date: Mar 2011
Location: Dallas
Posts: 2,361
Rep Power: 1
Garage
2012 Harley Road King Review
A friend of mine, goes by the handle of CrazyJeeper, just rented a Road King and took it on a 300 mile trip. Here's what he thought of it:

Quote:
Originally Posted by Crazyjeeper View Post
So after years of making fun of harleys for being stupid low tech tractors for fat men, I decided to see if I was right to be making fun of them for all these years and rented this bucket of chrome for a day. 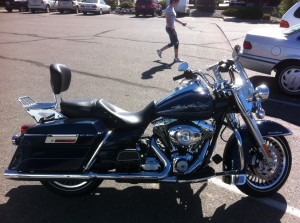 It is a 2012 Road King, with a 103 cubic inch fuel injected v-twin, six speed transmission, ABS, cruise control. The classic Harley bagger, but with computers, and it is utterly hopeless.

You turn the keyless ignition system on, hear the fuel pump whirr into life, thumb the start button and the twin instantly thunders to live and settles into such a lumpy idle the whole bike pulses as if it was hooked up to Tesla's earthquake machine. You think I'm exaggerating, but I'm not. The bars move up and down about an inch as the twin shakes the whole thing like a paint mixer. It does settle down to a more acceptable degree with revs, but the vibes never fully go away.

I had planned out a 300 mile loop to put the road king through its paces starting and ending in Grand Junction, Colorado where I had picked it up at the local H-D shop. This was my route.

I took off towards the Grand Mesa, climbing up to over 10,000 feet, riding up the twisting, winding roads, and found myself not falling in love with the road king. Every time I saw a rider on a sport touring bike or adventure bike I was hit with pangs of jealously for they had performance, and all I had was noise. Even this scenery didn't make the experience overwhelmingly pleasurable. 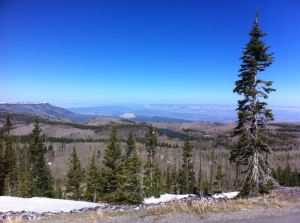 I pressed on until I saw another motorcyclist on a metric crusier of some kind stopped at a pull off and asked him to kindly take my photo as I wasn't exactly dressed like a normal Harley rider. 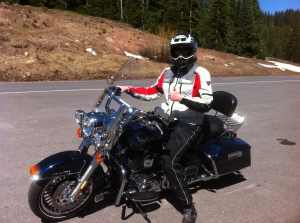 Anyways, as I continued, I found myself noticing a few shortcomings. Firstly, the power. You would think that 103 inches of v-twin muscle would be quite the thing, but really, it isn't. It doesn't help that the RK weights in at a portly 810 pounds but still, it should be quicker than it is. Harley claims it makes 100 torques, which it probably does, but the engine doesn't rev enough to make any meaningful horsepower. You really feel that throttle roll on push, but then as the revs climb the power falls off and you really aren't going very fast despite the tremendous noise emanating from the dual exhausts.

As I pressed on after lunch, the climate changed from alpine forests to dry desert canyons, and I still wasn't feeling any love for the road king. At one point I was ready to cut the loop off and just take that bucket back to the dealer but I figured it was about the same distance so I might as well take the scenic route, and treat it like a scouting trip for when I return with a real motorcycle. 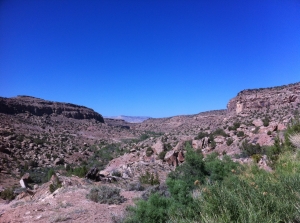 By the end of the ride, I had about 5 miles of city traffic to get through to get back to the dealer and it was pretty miserable. Every time you came to a stop, the paint mixer started again and shook the whole thing like a massage bed at a cheap motel. I was dreading stopping at red lights and the thing was especially useless in the city. It was a decent backroad machine if you didn't want to go fast, at all, but in town it was too wide, too heavy and too slow.

Really, the only useful thing I learned was that my new Rev'it Sand Jacket works great, even with no liners from 85 degrees down to about 50 degrees.

Harleys may have appeal to a certain demographic, but me, I still don't get it, and I won't ever be buying one unless they build something that feels like it belongs in this millennium. The 2012 Road King is the best 1940s motorcycle, but compared to contemporary 2012 machinery, it is utterly hopeless.

And here are a few more pics I shot. 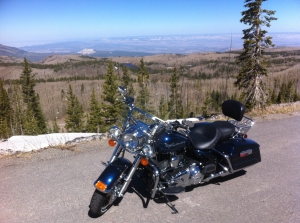 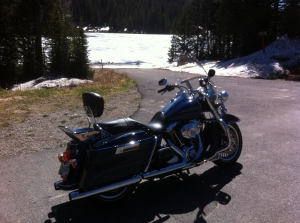 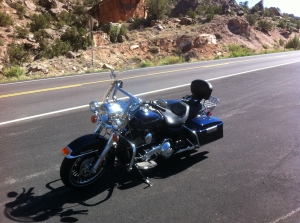 Join Date: Nov 2009
Location: Clarion, IA
Posts: 864
Rep Power: 1
Garage
Pretty scenery. And pretty well dead on with my feelings on every HD I've ever ridden. Still, a lot of friends love their HD's. Can't imagine why... maybe because they're old and fat and as a midlife crisis mobile, they're perfect. But just not for me. For what a Road King would cost ($17k), I'd rather get a new Triumph Bonneville T100 ($9k) and a used VFR (about $6k).
"Reason is not automatic. Those who deny it cannot be conquered by it" ~ Ayn Rand
mrhonda1987 is offline
Quote Quick Reply
post #3 of 5 Old 05-08-2012, 07:56 AM
TheBeeDeeGee
Hastatus Prior

Join Date: Sep 2011
Location: Mobile
Posts: 1,570
Rep Power: 1
My dad has one of these, but with the full front faring and radio and what knot. It was like a 22k dollar bike, which i can't even imagine spending. He's probably got 4-5 grand invested in the motor and exhaust system. So now it might make what my $3800 10 year old 919 makes HP wise. I've never actually ridden it, but I have seen the shake at idle and it's pretty insane.

I still don't understand why people will spend so much money on these. What it really makes me wish is an American company could make an affordable, decent sport bike. I just read the Motus is going to be $30k, WTF! Based on the reviews I've read the Victory's are much better V-twin cruisers than Harley's.

Join Date: Oct 2007
Location: Dallas
Posts: 497
Rep Power: 1
A good friend of mine has a 2011 RK with all the bells & whistles. I've spent some time on it. It's big & comfy and you can carry a lot with the hardbags. My wife loved the passenger seat and having a stereo on a bike is kinda cool. That being said... I doubt I would ever own one. Not my style...too heavy, too slow, too loud and too expensive. And that shaking is ridiculous at idle.

One thing I did like was the ABS. Very confidence inspiring in the rain.
My next bike will have ABS.
Mayday is offline
Quote Quick Reply