Down to electrical gremlins, paint & tires....

Not sure if this is appropriate for this forum, but she is family

Answered an add in the Hartford Current for a "Honda 400" for $400. Surprisingly it was 1/2 mile from my house. Met the guy and saw that the bike was rough, but realized that the parts alone on a '75 CB400F SS were worth the $400, and I Also realized that he didn't know what he had

Just as I was about to speak, the guys wife stuck her head out the door and said "hey, is he gonna get that thing outta the yard?" The guy looked at me and said "if you can pick it up today, its yours".

When I got it home, I realized that beside the faded paint, varnished carbs, wrong muffler, (but more importantly the correct header), and the fact that he apparently tried to jump start it off of a Peterbuilt, that it was totally stock and a sweet restore project. Stripped it down to the frame, pulled the heads (pistons, valves,etc just like they were in 1975) and have been picking at it ever since.

First of all, really great frikken project. Second, I see you have tape wrapped around that seat. As it just so happens, I have "i think" the same exact restored seat sitting in my garage left over from my last project. Mint condition...

Post some more pictures, be nice to see it in greater detail!

This thread should be in the classics forum!

Nice bike
Quote:
Originally Posted by kmmuellr View Post
Best headers EVER!
I was wondering where I'd seen them before: 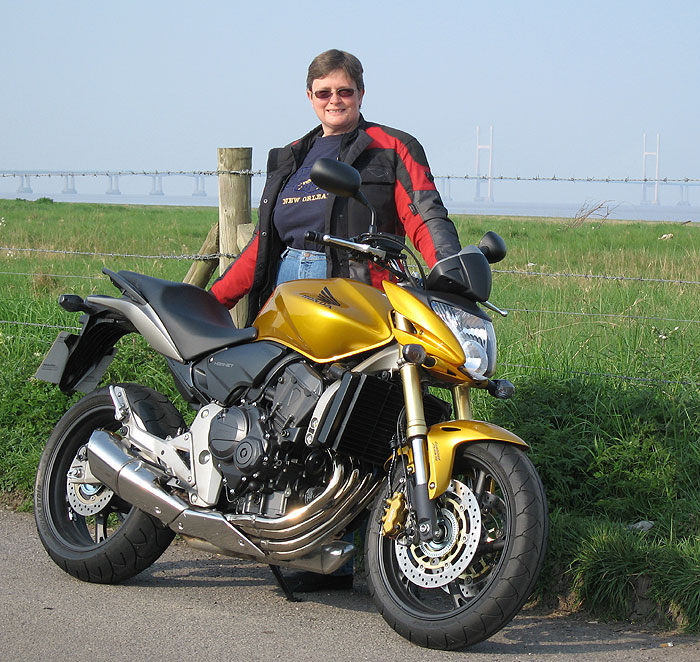 Actually I spotted the similarity straight away when I saw the current Hornet 600.

Quote:
Originally Posted by Simpson View Post
First of all, really great frikken project. Second, I see you have tape wrapped around that seat. As it just so happens, I have "i think" the same exact restored seat sitting in my garage left over from my last project. Mint condition...

Post some more pictures, be nice to see it in greater detail!

This thread should be in the classics forum!
You are correct on all accounts. Great project Sid.
Ridge is offline
Quote Quick Reply
post #10 of 29 Old 05-14-2008, 06:10 AM
ajcombs
Tribuni Angusticlavii

You ended up with one sweet deal. I had the yellow one back in 76'

Let me know if you need any technical help.

When its complete I plan to ride it to the previous owners house and bring he & his wife a nice bottle of wine.

I'll post more pics when I strip the body work this weekend to attack the wiring loom.

it's a clean machine
very clean...

Aprreciate the offer of tech help...
Being that you're a fellow CT res, I may take you up on the offer...the electrical stuff is a bitch!

My son has a laCrosse game in Litchfield this afternoon, so I'm gonna make a ride of it with the 919...grew up in Northwestern CT and love to ride there...gonna follow the Housatonic up through the twisties in Kent through Cornwall

You are a lucky, lucky guy ! Congrads on getting one of the few Hondas that I really like and wish to own !

It really shouldnt take alot to get it running, Ive worked on a couple of these bikes and they are pretty straight forward and really hearty - As for the electrical issue, put a new battery in it and Id almost be willing to say that will take care of your issues- unless of course you can see where the harness has been chewed on by some critter that is --
2ohno is offline
Quote Quick Reply
post #16 of 29 Old 05-14-2008, 07:45 AM
Bigdaa
Brain stolen again?

Join Date: Jan 2006
Location: Goleta, California
Posts: 17,148
Rep Power: 1
Janet, you trying to bring the folks to tears here with that pic, or what?

That is such a sweet find, Sid. Do everyone here proud by making that sweet thang shine again!
I said I never had much use for one.
Never said I didn't know how to use it."
Mathew Quigley
Bigdaa is offline
Quote Quick Reply
post #17 of 29 Old 05-14-2008, 07:48 AM
SV650s
Legatus Legionis

From the pics it appears the wiring should be in decent shape. You might want to get running before tearing into the restoration. This way you can insure all is good from square one. This bike has dual points (1 & 4) (2 & 3). They are easy to set then adjust the timing. Do you have a timing light?

Enjoy the ride today, the weather is magnificent. 11 am tee time!!! WhooHoo

And you, Janet, Get your Horniated butt over here and ride with us you crazy brit broad !
Lemonhead is offline
Quote Quick Reply
post #20 of 29 Old 05-14-2008, 08:40 AM Thread Starter
SidtheSloth

He obviously tried to jump this thing off of something powerful because he melted ****!!

And off course, there were my errors...had it running for about 30 seconds after I had stripped it down to the frame, painted the frame, replaced the head gasket, cleaned and painted the engine. replaced the muffler with a new stock one and reassembled the bike...bike turned over with the help of starting fluid, then stopped...tried & tried to start again, and finally burned the old starter up. Realized later that I had minimal fuel in the tank and the petcock was not in the reserve position...moron.

On a side note: funny story about critters chewing on stored bikes. I bought a 82 CB750F SS about 12 years ago. When I went to look at the bike I was concerned about critters as the shed was open and infested...but the bike was nest/food free?!?!?? As I pulled the seat off the bike to look inside I saw that a snake had made the bike his home and keep it rodent free

Quote:
Originally Posted by SidtheSloth View Post
When its complete I plan to ride it to the previous owners house and bring he & his wife a nice bottle of wine.
You should give the guy some pics or maybe even take a picture of him on it for memories sake. Nice find indeed. Can't wait to see her all finished and rolling.
streakin919 is offline
Quote Quick Reply
post #22 of 29 Old 05-14-2008, 01:30 PM
HandoEX
nom nom nom

Quote:
Originally Posted by SidtheSloth View Post
When its complete I plan to ride it to the previous owners house and bring he & his wife a nice bottle of wine.
Just better hope he doesn't call the cops and report it stolen when he sees it

Very nice job on the resto Sid, and wow what a great find

Sid, great project and please keep us updated. I know the NW CT roads quite well ... they've been part of my riding for years. I'm right over the line is MA (literally 300 yards). If you need any help, if I'm around ... I can assist. If you need a different ride let me know ... I may be able to help you sample other rides.
It's better to have loved and lost than live with the psycho for life!
RC51_CBRXX is offline
Quote Quick Reply
post #25 of 29 Old 05-14-2008, 05:47 PM
V65rider
Imaginifer

Just chiming in like the others at such a cool bike.

Quote:
Originally Posted by GDJAM View Post
Just chiming in like the others at such a cool bike.

That bike, in the right hands, is a back roads scalpel!!!!
We road raced one of these 4's back in the 70's. It was quite competitive.