Sorry for the novel, but it was a LONG weekend! (this was a few weekends ago, I'm currently waiting on some parts and I'll be out enjoying it even more!)

I got off work Friday at 6PM and headed down to Rob's house in Georgia. I arrived around 11PM. We headed to bed a bit after midnight (12:30AM -ish). Alarm went off at 4:45AM and we were on the road at 5AM. We went to Oviedo outside Orlando and picked up the bike and then shot across the width of the state to Tampa to pick up the engine since the bike supposedly had bad compression and would not run. We arrived back at Rob's house at 10PM after 17 hours on the road. We unloaded, had a beer, headed to bed. Got up Sunday and hung out with his kid for a bit till she was up and mobile, then we started tearing the bike down to really get an idea of what I was dealing with. Let me just say this......while the guy I got it from was cool and honestly probably had never turned a wrench on a bike in his life.....this bike was in the hands of some cheap, ghetto, moron before him. The guy had a fuel pump (not stock) wired in all kinds of nasty underneath the tank. He also apparently had some long bolts, but instead of buying proper length bolts to attach things he just put spacers everywhere.....let's not forget the exhaust. The header is a D&D, the can is some OEM Yamaha can with a Yoshi and D&D emblem riveted on. The headers, mid, piece of mid from stock Yammi can, are ALL WELDED TOGETHER!!! Even though it's all welded, he put clamps on, like 4-5 of them???? The front brake res is some homemade ghetto thing with a zip tie. There are zip ties everywhere. There is a chrome rear brake reservoir cover as well. There was a cross bar under the windscreen for some reason. I'm SURE I'm leaving stuff out, but WOW! Well, we did a little trouble shooting and came to the conclusion the fuel pump was garbage and the starter was fried. Swapped those out and BAM!!! She fired right up! We of course removed most of the garbage off the bike and tossed it. Took the bike around his neighborhood with no issues, went to take a short ride after but it died at the end of his street. The battery isn't charging so I just bought another generator and I'm getting a new battery. I headed back to TN at 6:30PM and got in around 10:45PM Sunday night. Next weekend when I go back to Rob's house we'll slap those on and see if we can't go for a ride! I'm sure I'm leaving a lot out, but I've already wrote a novel. On with the pics! More info to come later!

Here we are packed tight in the truck after picking up the engine:

Thought this was cool, they were dumping the new railroad ties to be installed:

That doesn't go there:

Draining the tank in the AM:

The engine I picked up thinking we may need it:

Changing out the starter:

Rob taking his turn riding it through the neighborhood:

Some pics of mine and his together after we put them up for the day:

Quote:
Originally Posted by applespeed View Post
wow nice bikes! where can i find one?
I got this one off of CL and took a chance. There was a "running" one up in Ohio or Northern PA or something for $300 less, but it looked like hell and the owner seemed like a tool. The guy I bought this off of was very cool, not that knowledgeable about bikes, but nice to deal with and my gamble paid off on the engine running

Join Date: Aug 2007
Location: Northern Wisconsin
Posts: 718
Rep Power: 1
You're right, those 750's are timeless...Always loved that bike for some reason. I gotta tell you, you travel as much as I do to get your bikes! The "one" is never just around the corner.....

Quote:
Originally Posted by 97af View Post
You're right, those 750's are timeless...Always loved that bike for some reason. I gotta tell you, you travel as much as I do to get your bikes! The "one" is never just around the corner.....

You sir are correct! My record thus far is Staten Island NYC and back in 24 hrs 15 min (2 hours of that was loading the bike into the back of a minivan and bs-ing with the owner) and as soon as we arrived we unloaded and I drove straight to work and worked the AM shift

Join Date: Aug 2007
Location: Northern Wisconsin
Posts: 718
Rep Power: 1
Quote:
Originally Posted by BMiller View Post
(2 hours of that was loading the bike into the back of a minivan and bs-ing with the owner)
Too Cool...Yep, I always figure in at least 2- 2 1/2 for the BS session too!
That'll work........

hahaha! Yeah man, it's pretty cool the history and stories you can get from p/o's when they aren't some snot nose kid


Join Date: Jun 2009
Location: FL
Posts: 1,839
Rep Power: 1
I havent seen one of those in years, are we getting to the age where we remeber the classics when they were on the showroom floor?

Tom Kipp and others in AMA Superbike.

I didn't even know they made Yuengling in a Light.....that was Rob's beer in the fridge

Tom Kipp and others in AMA Superbike. 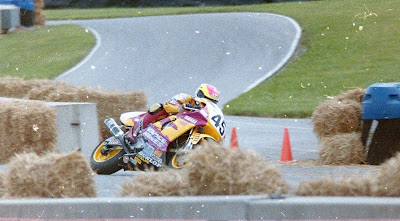 The following weekend I was back in ATL at my buddy's house and we did some more work on the bike:

We swapped out the undertail battery tray for an unmolested one, the wiring harness, generator, and put fresh radiator fluid in along with swapping out the brake lines:

Then I got it home and took off the old junk exhaust (and boy is it heavy!):

Got my Hindle headers in:

Got my new Hindle can in and completed the exhaust and went for a spin (I also removed the stickers from the back of the tank and the swingarm):

I love that "sock/sweatband" even though they serve no purpose:

Quote:
Originally Posted by Blue919Guy View Post
Looks 100% better already- I love the D&D/Yoshii collaboration on the can it came with hahaha
Alex,

Join Date: Apr 2010
Location: *
Posts: 765
Rep Power: 1
Its amazing how much better that Hindle looks. I wonder if that same guy who used a tin can and flex pipe to rig up his custom exhaust designed your pipe.

Isnt it nice working inside?

Great work, are you basically going back to OEM besides your exhaust?
I'm currently in the repair/replace mode, so yes. Expect to see some changes/improvements very soon though


Join Date: Mar 2011
Location: Maryville,TN
Posts: 1
Rep Power: 1
Great bikes! They get in your blood!
I have two myself. After selling my 97 which I bought new,I have gotten back into them. Awesome bikes if you can live with their gremlins.

My 96 is my baby. It rips along pretty good.due for needles and tubes.

If you ever want to ride,I'm game. It would be great to ride with another YZF 750!

I have quite a few parts but they are still up in CT. I am so glad to be back down south!

A little update since it's been a while......got my 07 R1 front end on and started mocking up my Koso RX2N gauges! Bled the brake lines today and started putting the cooling system back together. I have most of the gauge wiring done as well. Getting closer! And excuse my massive mess.....too many projects happening at once.