need brake pad advise
i'm wanting to replace the brake pads on the 9r b4 a trip to deals gap. whats the best street brakes?

Best pads are the stock OEM pads. Other aftermarket pads will wreck havoc on the rotors.

Join Date: Feb 2009
Location: Northeast PA
Posts: 329
Rep Power: 1
I have to agree with using the Honda OEM pads on any type of Honda bike. I raced a 450r quad in the GNCC series for a few years and the Honda pads always held up much better than any aftermarket pads. A lot of people pushed/praised the aftermarkets like EBC and I never understood it.
frankly is offline
Quote Quick Reply
post #4 of 14 Old 09-21-2009, 05:24 PM
gospeedracer919
Where The Hell Is Tirone

Join Date: Oct 2006
Location: Cornelia, Ga.
Posts: 29
Rep Power: 1
Galfer cintered ceramic pads. IMO. My original pads lasted a little over 5K. These pads are going on 12K. Most of my riding is hill riding so normally pretty heavy on front brakes.They take a couple of applications to warm up, but once warm great control and predictability with 2 or 3 finger control.
Never under estimate the power of
stupid people in large groups.
gospeedracer919 is offline
Quote Quick Reply
post #5 of 14 Old 09-21-2009, 10:11 PM
mantelhonda
Immune

Join Date: Apr 2007
Location: OH
Posts: 917
Rep Power: 1
I like EBC HH pads. Way better than stock. And they work great on the street and wont overheat as easily as stock pads. I used Ferodo once. they sucked.

Ferodo only lasteed 12k miles. The EBC pads lasted 30k miles. Stock pads only lasted 19k and that was with wussy newbie riding. that 30k on the EBC is with plenty of deals' gap rides and track days.

I'm currently running the EBC HH's & I really like them too.
I can't make an argument that one is better than the other, but I do like the EBCs.

EDIT: just to add a little more info,
I've done 1 track session on them & they handled fine (keep in mind this was my first time on a track - I'm not out there dragging a knee)
All other riding is commuting to work & "spirited" group rides... FWIW
Abba Zaba, you my only friend.
omaha_919 is offline
Quote Quick Reply
post #9 of 14 Old 09-25-2009, 06:57 AM
sidlives
Droppindrivers

The main pad people refer to when it comes to the EBC Brand is their "HH" model. Some people swear by them and others chime in accordingly, but I can tell you from first hand experience that the EBC HH pads are crap... The backing plates are too thin and the heat causes them to warp which creates parasitic drag.

Now inevitably someone will pop up & spew out something along the lines of "I've been using them for years and have never had a warping problem". Yea well those are usually the same guys that say their tires "stuck like glue" all day when they review the latest rubber donut for their steed. If they never got the tire to spin up they weren't riding it hard enough to find the limit of traction and the same is true with the brake pads. Those that don't have problems with the EBC pads are typically the guys that aren't riding hard enough to need the HH Sintered pad and funny enough they are also usually the ones that praise them the most...

10-12 years ago when there were no other choices for HH type pads the EBC's were better than most in spite of the warping problem (although I preferred DP pads back then ) , but huge advances have been made in the technology behind brake pad compounds and now there are many far better choices out there in fact I think the OEM Honda pads outperform many of the brands race pads from even just a few years ago. They have the feel, feedback and outright stopping power and even the longevity in some cases that would put most race pads to shame from the same time frame that the EBC HH were initially sold.

I can also tell you from personal experience that when EBC was paying contingency money (they may still be I dunno) many club racers were running the EBC stickers on their bike and using a different brand.

As a sidenote it is also worth mentioning that EBC made a "kit pad" HH with thicker backing plates that did not warp. I have seen these in person, but have never seen them for sale nor do I know where to get them, but again either way there are many better choices out there for both street & track use.

Another pad to stay away from is the Ferodo SinterGrip ST. These have got to be the most inconsistent pads I have ever tried and they lack any type of feedback at all.


Since we are on this subject also be aware that if you are switching to a new brand/compound of brake pad that you need to clean the old pad residue off the rotor for it to be truly effective. The best way to do it is by glass bead blasting the rotor surface, but I realize not everyone has a bead blasting cabinet in their garage so a cheap alternative is to use a maroon scotch-brite pad and some simple green and a lot of elbow grease to scrub both sides of the rotors & I mean scrub... It takes a lot of effort to get that metal residue off the rotors & your fingers will ache when you are done, but the end result is worth it & be sure to rinse the Simple Green off thoroughly too.

Also be aware of certain spray can Brake Cleaners. Many of them leave an invisible film that coats the rotor and reduces the effectiveness of your new pads.


That's all I have to say about that

Join Date: Apr 2007
Location: OH
Posts: 917
Rep Power: 1
So LDH. What have pads have you recently used that you like? Don't leave us hanging by telling us our beloved HH pads are not worthy and then not give us an alternative.

I've got some Galfer Black semi-metallic pads tucked away in a box waiting for the day when my stock pads finally wear out. This thread has made me question my choice, anyone have any experience with the Galfers, LDH?
sbeau1960 is offline
Quote Quick Reply
post #14 of 14 Old 09-27-2009, 09:00 AM
LDH
Test Rider

I've not used a Galfer pads that I thought were sub-par. In my opinion very few pads really stand out like say HRC pads for the RC51/600F4i and 1000RR.

One of my recent favorites are the SBS Dual Carbons. We used to joke that SBS meant "Stop ####h Stop" because their pads were sooo bad, but a few years ago I got a sponsorship deal with Parts Unlimited & they gave me some of the SBS Dual Carbons to try and I was amazed. They are a race only pad so they have to get hot to work, but once they are up to temp they never fade in fact the hotter they get the better they work. Now they lack a lot of initial bite which some riders prefer, but I was willing to overlook that for the performance they offered and they were CHEAP!!! When the sponsorship deal ended I had to actually buy some and my cost was like $45 for the whole front end! (retail $75). The downside is wet weather use. They work well in the wet as far as stopping power goes when it's a light rain or drizzle, but use them in a monsoon with standing water all over the track and the pad quickly disintegrates into a mushy graphite like substance and you find yourself metal on metal with no brakes...

Of course out here in Cali there is little chance of rain so one of our 1000RR's has the SBS DC's & the other one I have been trying out the Carbonne Lorraine C55 race pads. They are basically a great all around race pad. They don't really stand out in my mind, but they do their job very well and consistently and for $100 retail they are also relatively inexpensive compared to some of the $140-$160 pads that are available like the Vesrah SJRL's which are in my mind worth the money, but I can get almost the same performance out of a $100 pad then I am going to go that route...

The real secret to braking performance is only partially related to the proper pad compound. A Brembo Master Cylinder offers more feel & feedback than any choice of pad and truly changes the way your bike responds to braking inputs. 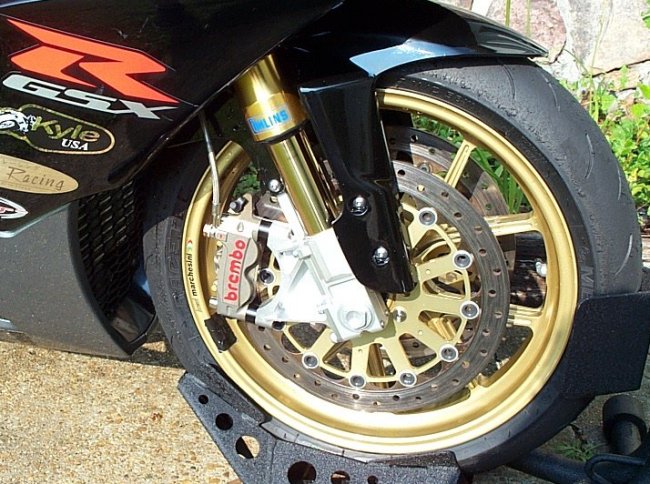 « Check out this custom 9er | Back in the saddle again! »