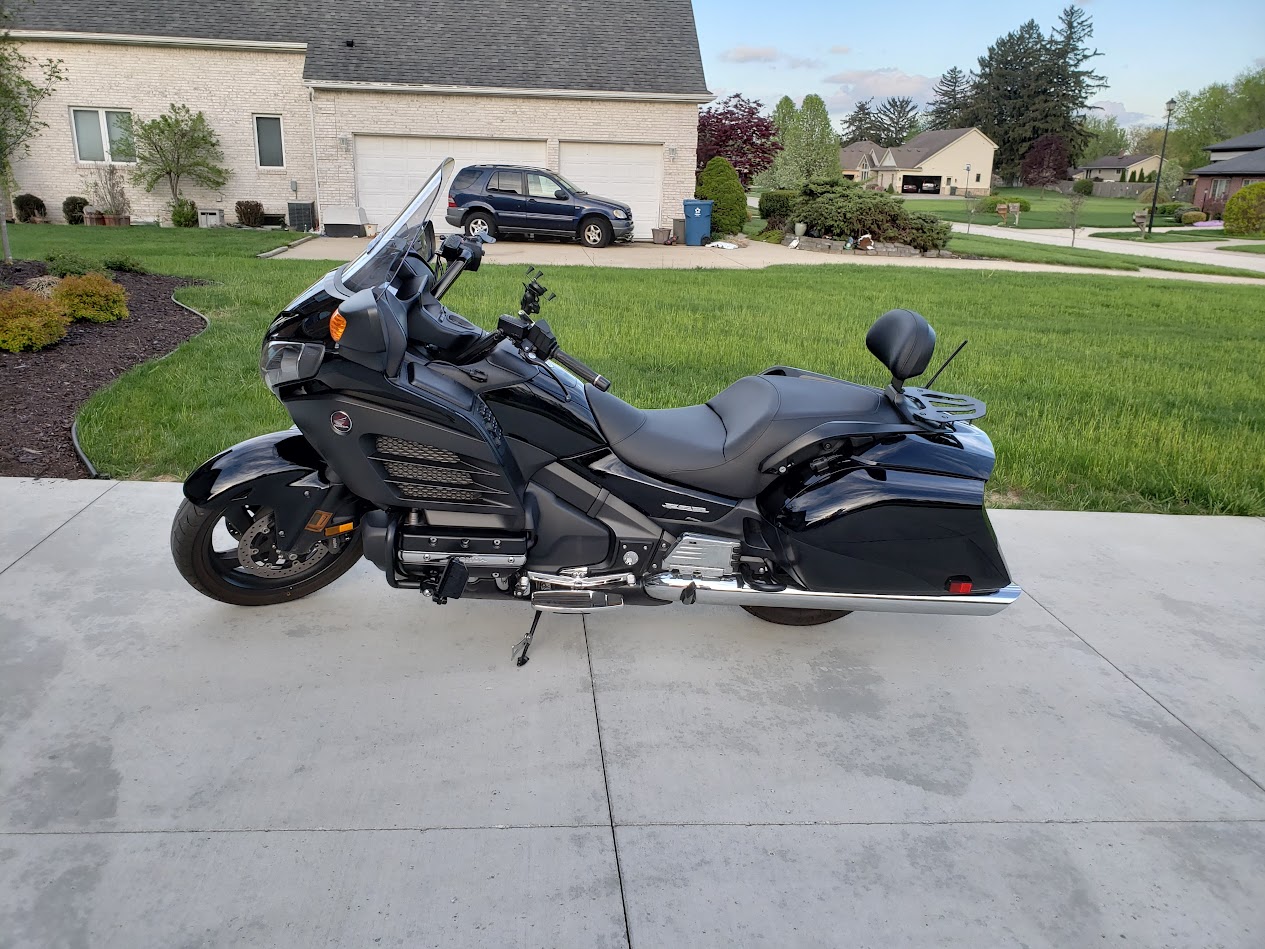 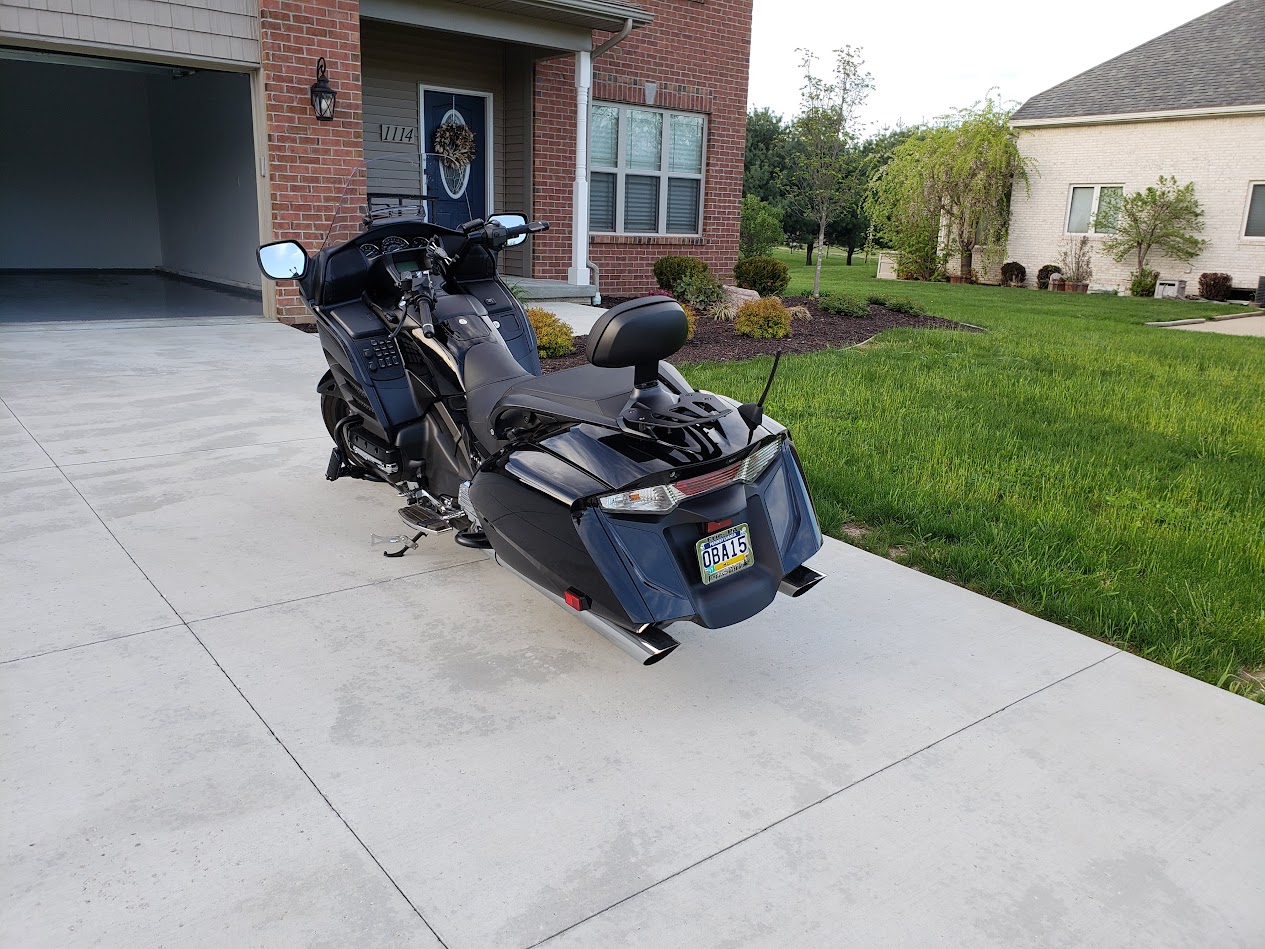 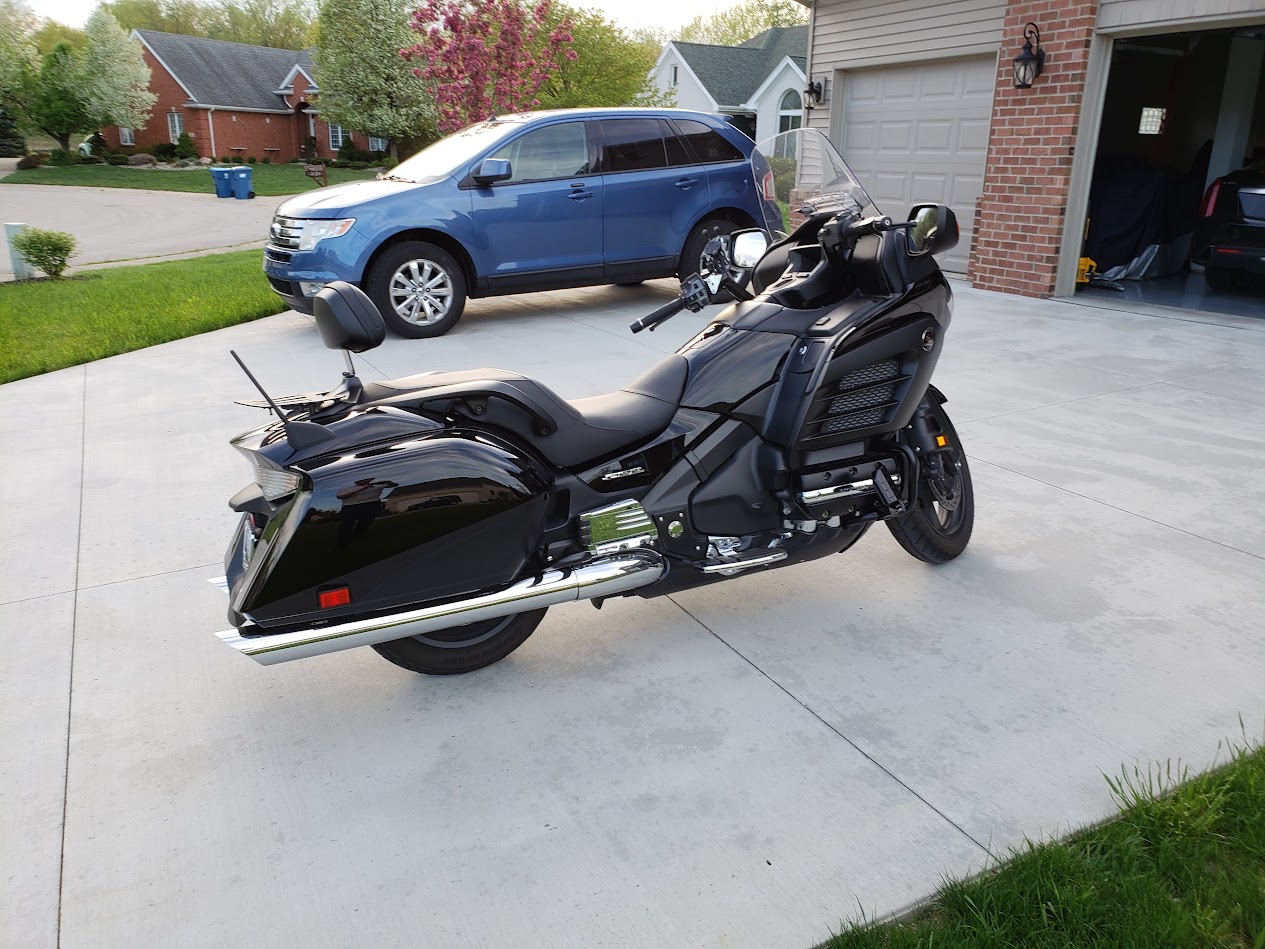 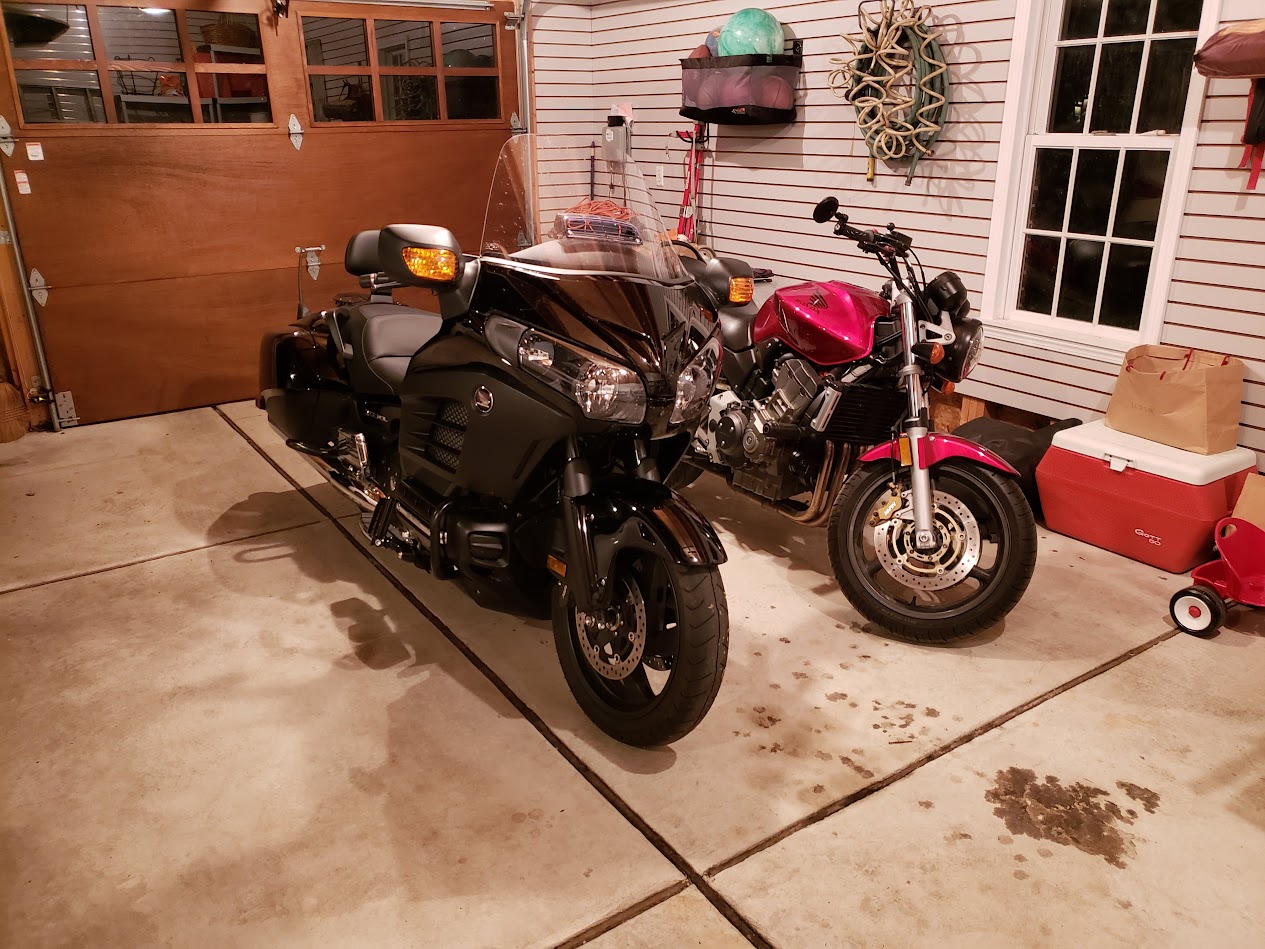 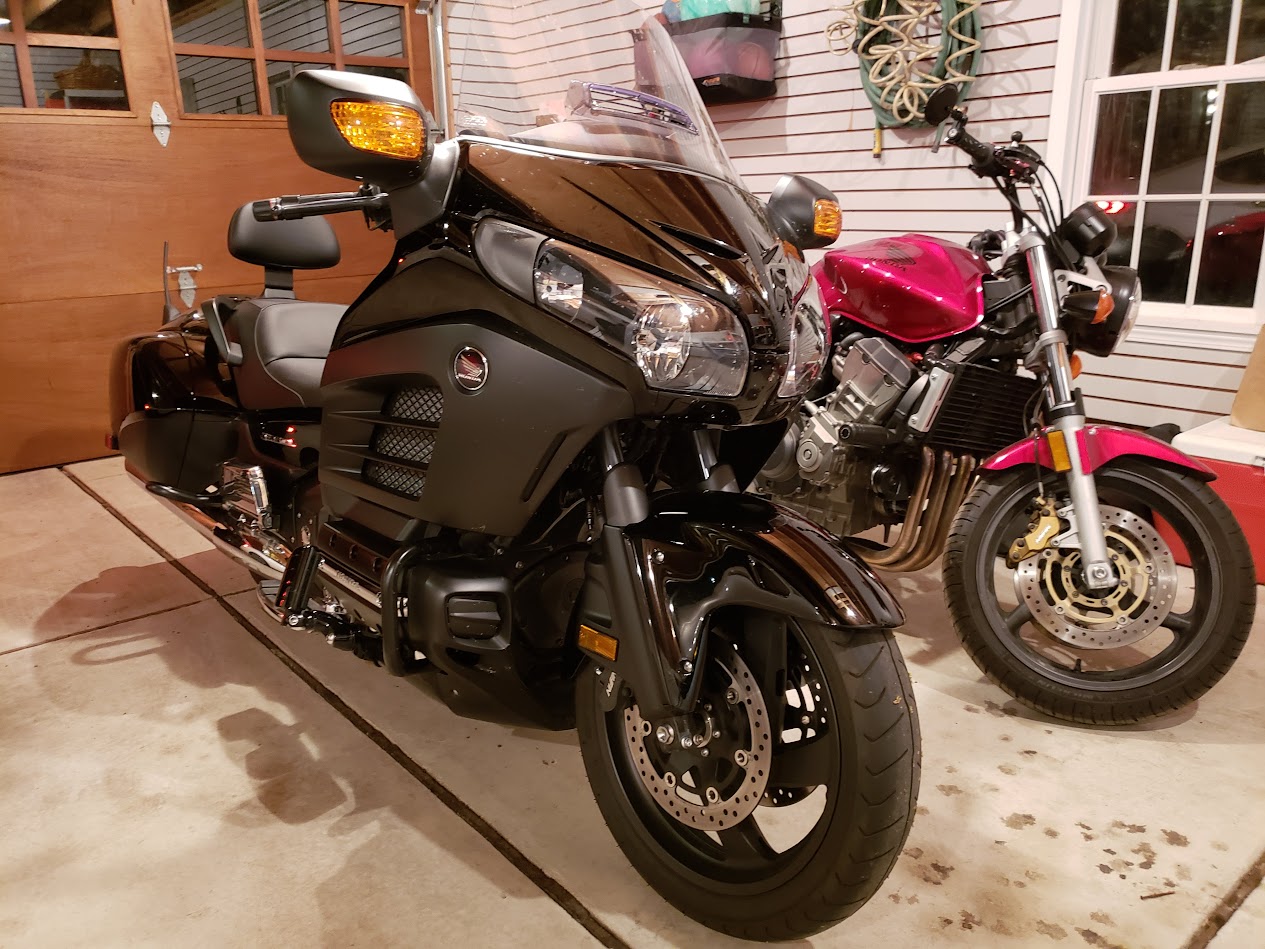 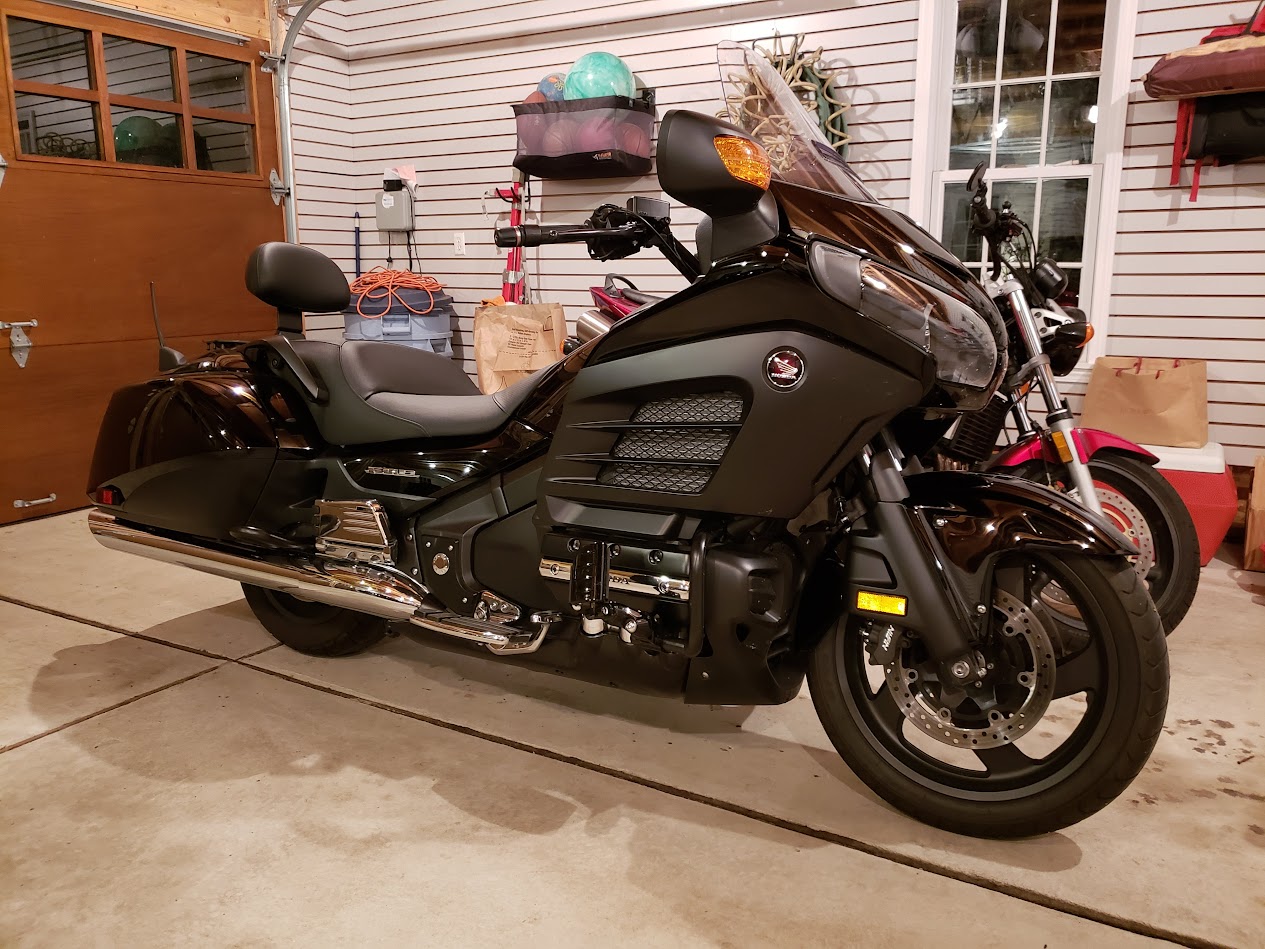 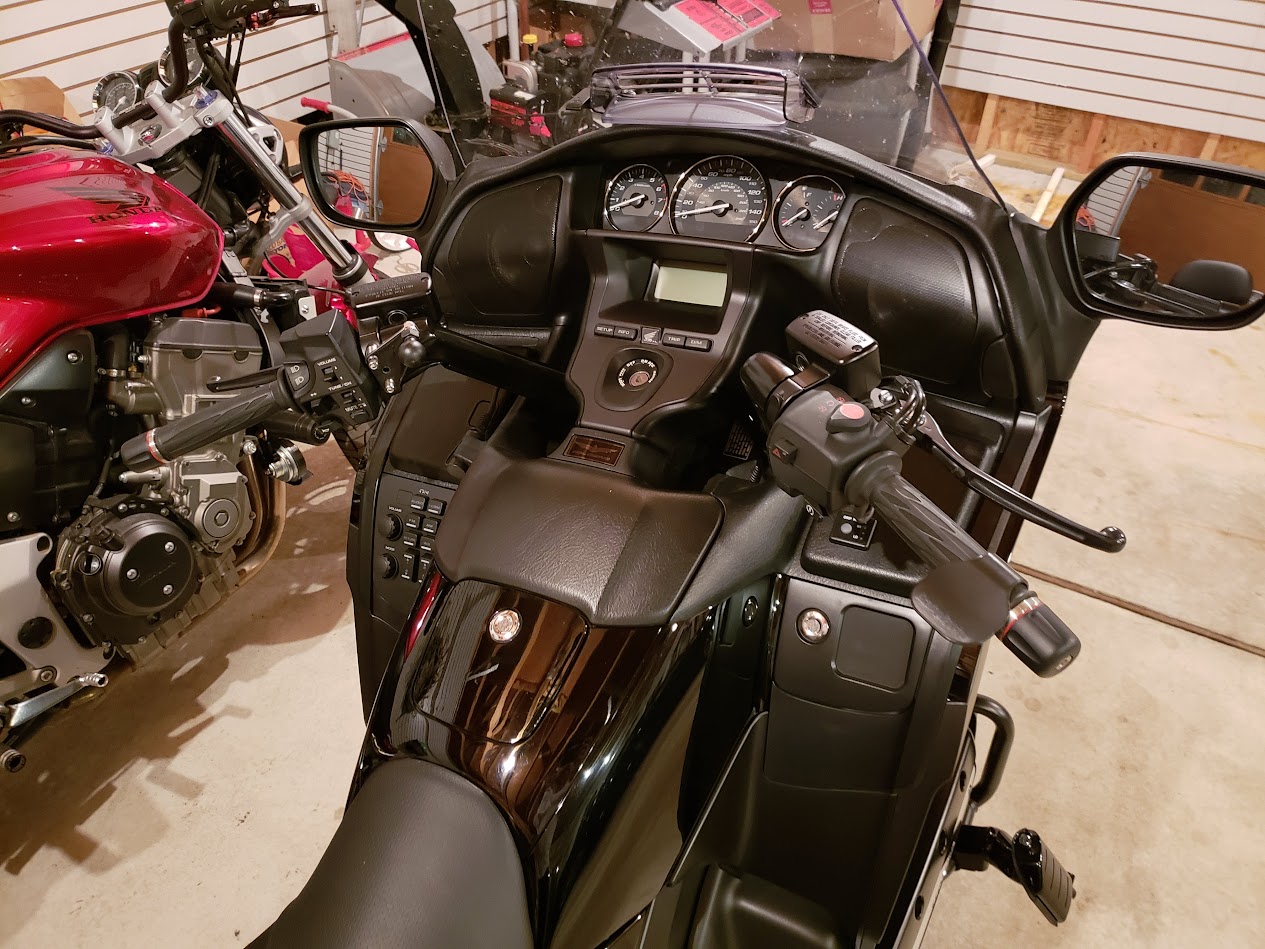 (Here's the Album too: https://photos.app.goo.gl/v4SXRZgg9j0aOApn1)

I bought it in Erie, PA and I live in Detroit, MI, so I had to get it back home. I hopped a flight to Erie, bought the bike, and rode it all the way home in the afternoon. It was a beautiful ride and, not surprisingly, the F6B is much more comfortable on the highway than the 919. It's the deluxe model, so it's got a center stand, heated grips, passenger back rest, and a rear luggage rack. In addition, the PO put on a TorqMaster exhaust with Torq Loops, floor boards and controls, highway pegs, wired for communications, and a touring windscreen (which is coming off). I kinda feel like I stole this, but I'm not gonna complain about getting a deal. Poor guy had to pay $2k on top of our price to discharge the lien. He said he wasn't using it, as evidenced by the low miles, and I've already put close to 500 on it.

The bike is beautiful and the ride is wonderful. I've never been on a Goldwing, but the F6B handles better than it should given how much it weighs. It carries the weight down low and while you have to acknowledge that it's a heavy bike (I wouldn't call it nimble) it definitely puts a Harley to shame. Yeah, it could use some updated electronics and features, but the overall fit and finish is awesome. The seat and riding position are very comfortable and gives more space for taller guys than the regular Goldwing. I really like the look of the analog gauges and having big beefy buttons for everything is definitely preferable to smaller ones or a touchscreen. This thing absolutely hauls ass. Calling the engine's output a Torque "Curve" is not accurate; it's a Torque Table. There's always passing power on hand thanks to that big flat 6.

-The touring windscreen puts the wind right across my brow line (I'm 6'6") so there's some pretty good buffeting going on. I'm going to put on the smaller windscreen because I'd rather be in clean air at speed than deal with the head bob. We'll see if that helps.
-This bike is definitely wanting a 6th gear. It's got a 5th gear OD and does fine when you keep it around 75mph, but once you start getting over 80mph, the engine is turning 3k plus, and that's just too high for an engine that develops that much torque. It could easily move the bike with 750-1000 fewer RPMs.
-I wish it had cruise control and ABS. The crampbuster works fine, but already I'm thinking about trying to wire up Honda's CC. The linked brakes work great and stopping isn't a problem at all, but I'd certainly like the peace of mind of ABS.

I still need to fiddle with the suspension preload and just get more comfortable with the bike, but so far this bike is everything I wanted and more. Everything about it says bulletproof and high quality. I'm not hanging up the 919 by any means, I just won't be riding it up North to the cottage anymore haha.

If anyone has any questions or tips for me, I'd certainly like to hear them. Now, I just need to decide on the vanity plate (5 letters) and the name. I'm leaning towards F6BB8 for the plate (I'm a Star Wars nerd). The 919 is named "ScarJo", so I'm open to suggestions on that front.

Join Date: Oct 2014
Location: Birmingham
Posts: 217
Rep Power: 1
Quote:
Originally Posted by ViralVendetta View Post
Is it a V6 like the gw is?
It's the flat 6 from the GW. Same engine, transmission, and most of the mechanicals with a different tune on the suspension.
DSB_ESQ is offline
Quote Quick Reply
post #6 of 13 Old 05-14-2018, 05:38 PM
Coondawg07
Milites Gregarius

Great looking bike! It will contrast well with the 919 and help you to appreciate the differences.
With plans to do trips I'd definitely add Honda's cruise control if that can be adapted. As a low cost alternative a throttle lock makes a big difference. (I use one on my VFR)

I did the same last year. I have never owned a Goldwing, but when I saw the F6B, I thought "I can do this". In any case, I pulled the trigger as well and have never looked back. Here's the odd thing though, the more I have ride the F6B the more I appreciate and enjoy its Cadillac type character. At the same time, the more I ride the F6B, the more I enjoy my 919 and its light weight quick response nature. I always said, if I have two bikes in the barn, I want them to be polar opposites. Mission accomplished.


This picture was taken on my first trip after the purchase. Deals Gap, the Blue Ridge Parkway and many other roads I cannot name. Every idea of how this bike would perform, was wrong. Got a slightly higher shield, up-graded the HL lamps and continue to ride. Whenever your sure you have things figured out, think again. Or in this case, just try something new and completely different. It just may open your eyes a bit.
Mark61 is offline
Quote Quick Reply