Join Date: Jan 2020
Posts: 30
Rep Power: 1
I don't know how to title this thread. Just come look please.
I went to a friend's house to try to locate the speedometer corrector since I changed my sprocket setup. The previous owner had a 15/45 combo on it and I changed it to the much more timid 17/44 setup. After learning the speed sensor connector was behind the air intake horn, I figured I'd just trace the wire until I found the corrector.

I took off the side cover, no big deal. I then removed the three screws that hold the horn on. After removing the third screw and popping off the intake horn, I was greeted with... 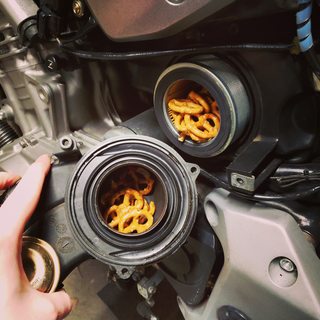 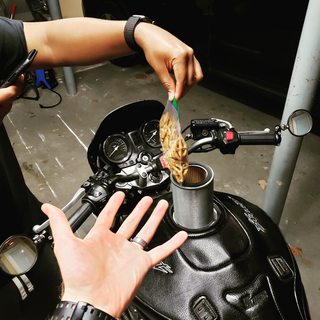 Yeah. You're seeing that correctly.

Believe me or don't. Whatever. I promise you this happened just yesterday evening. My friend was my witness and we were both completely baffled. There was a lot of surprise and howling laughter between us. We really had no idea what to think.

I texted the previous owner of the bike (first time I've talked to him since I actually bought the bike) about it and his reaction was about the same as mine. 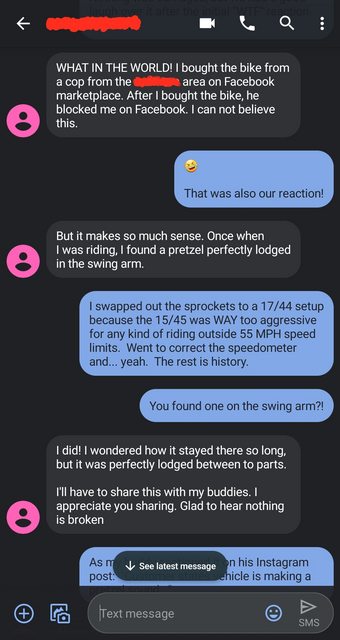 From his message, I concluded he never took off the airbox cover in the short time he owned the bike before I bought it. However, he was apparently VERY confused upon finding a random pretzel lodged in his swingarm.

Considering how many were in there, this had to have been done intentionally. They must have packed the airbox full of pretzels and quickly put the cover back on, because they were spilling out the minute I removed the cover. The only question left that needs answering is WHY. Our theories include a prank that went undiscovered or unrevealed, a pissed off mechanic, or maybe the previous-previous owner's kid got crafty and took apart the airbox to pack it full of pretzels.


Join Date: Jan 2020
Posts: 30
Rep Power: 1
Quote:
Originally Posted by K1w1Boy View Post
The old "added-hp-by-pretzel" mod, eh? Excellent!
Maybe the theory was that the salt on the pretzels would remove the moisture from the air before it entered the engine.
mcromo44 likes this.
SPDSKTR is offline
Quote Quick Reply
post #4 of 9 Old 03-06-2020, 01:00 PM
Islandboy
919 Rider

Quote:
Originally Posted by Islandboy View Post
WTF! They were packed into a bag. So it couldn't have been a critter.
I believe he said that he put them in a bag after he pulled them out, but they were found in the airbox unpackaged. I wonder if you'd lose any horsepower from an intake full of pretzels. Probably not, but now I know where I'm gonna store stuff if I need to smuggle anything over the border.
nathanktm is offline
Quote Quick Reply
post #6 of 9 Old 03-06-2020, 01:20 PM
Islandboy
919 Rider


Join Date: Jan 2020
Posts: 30
Rep Power: 1
There was no hair or droppings or scratches inside the intake duct or air filter that showed any kind of rodent activity. With that said, I'm almost certain it had to have either been a prank or a child with some small hands.

Either way, with the pretzels removed and with the 17/44 gearing setup, this thing runs harder than Usain Bolt being chased by reporters. Yeah, the stupid amounts of torque from the 15/45 setup are gone, but let's be real... it's still absurdly quick.
SPDSKTR is offline
Quote Quick Reply