Join Date: Oct 2014
Location: Birmingham
Posts: 217
Rep Power: 1
Ride to Hell and Back
This weekend I took a day trip with a buddy out to Hell, MI. He doesn't own a motorcycle so he ended up renting a Harley Fat Bob. I know, not my favorite either, but he grew up with HDs and they're special to him and his dad. I will say that of all the HDs in the lineup, I like the Fat Bob the best. It was funny hearing him and the dealer repeatedly refer to the Fat Bob as "sporty and athletic." But I guess if you're comparing it to other HDs it fits that description.

Anyway, we rode from the HD dealership out to Northville, MI and started our trip. I didn't take many pictures on the ride, but I've provided the route so you can street view where available:

We took Edward N Hines Drive all the way out to Dearborn and then turned around and rode it back in to Plymouth. The road follows the river and there are parks all along the route. There are some decent twists and turns so it's hard to pass, but it's a pretty ride and a nice way to start a day.

From Plymouth, we took N Territorial out West before heading North to Hell. The road is fairly straight but goes through some beautiful country. Big trees shade the road and there's rolling hills on either side. Traffic was light and it was really pleasant.

We stopped in Hell at the Dam Site Inn for a burger and a beer. The people watching is incredible. I was riding in full gear despite the 87° heat and one of the bikers in only a leather vest and shorts said, "How can you even go out dressed like that?" Everyone gets to make their own choices and I'd rather sweat than risk riding without gear. 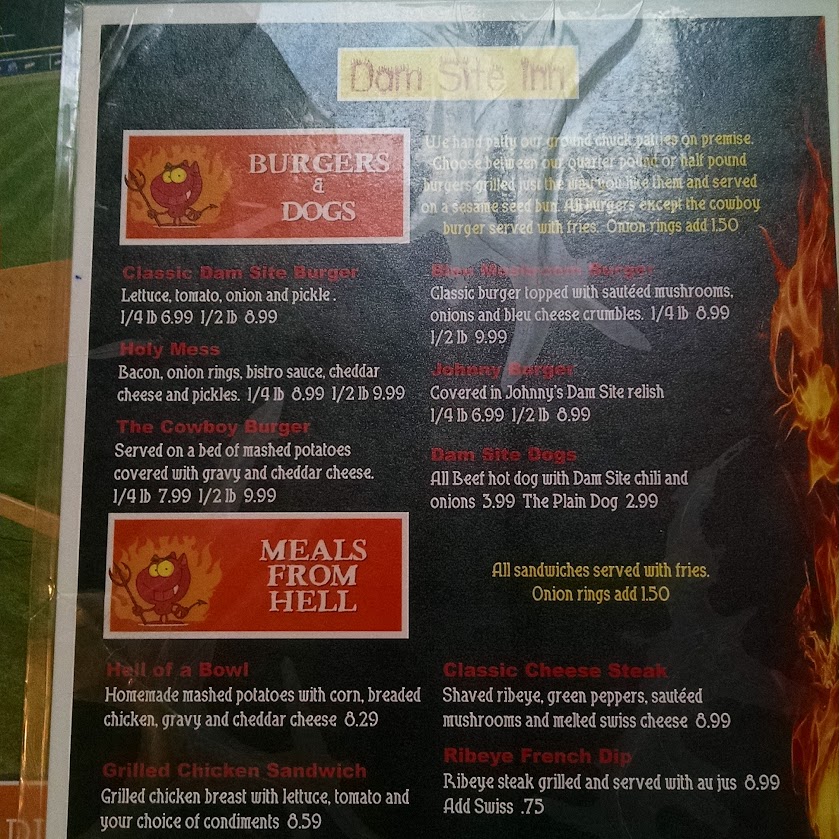 The ride from Dexter to Ann Arbor along Huron River Drive was really the gem of the trip. The road was freshly paved and there was no traffic. The road follows the river and sweeps around through the hills. I rowed on the Huron when I was in college and it was definitely memorable to be riding along the side rather than on the river for a change.

After refueling at the food trucks in Ann Arbor, we simply took Plymouth Road back out to my buddy's place and rode a little more on Edward N Hines Drive after grabbing dinner. It was very pretty riding in twilight as the sun was setting. 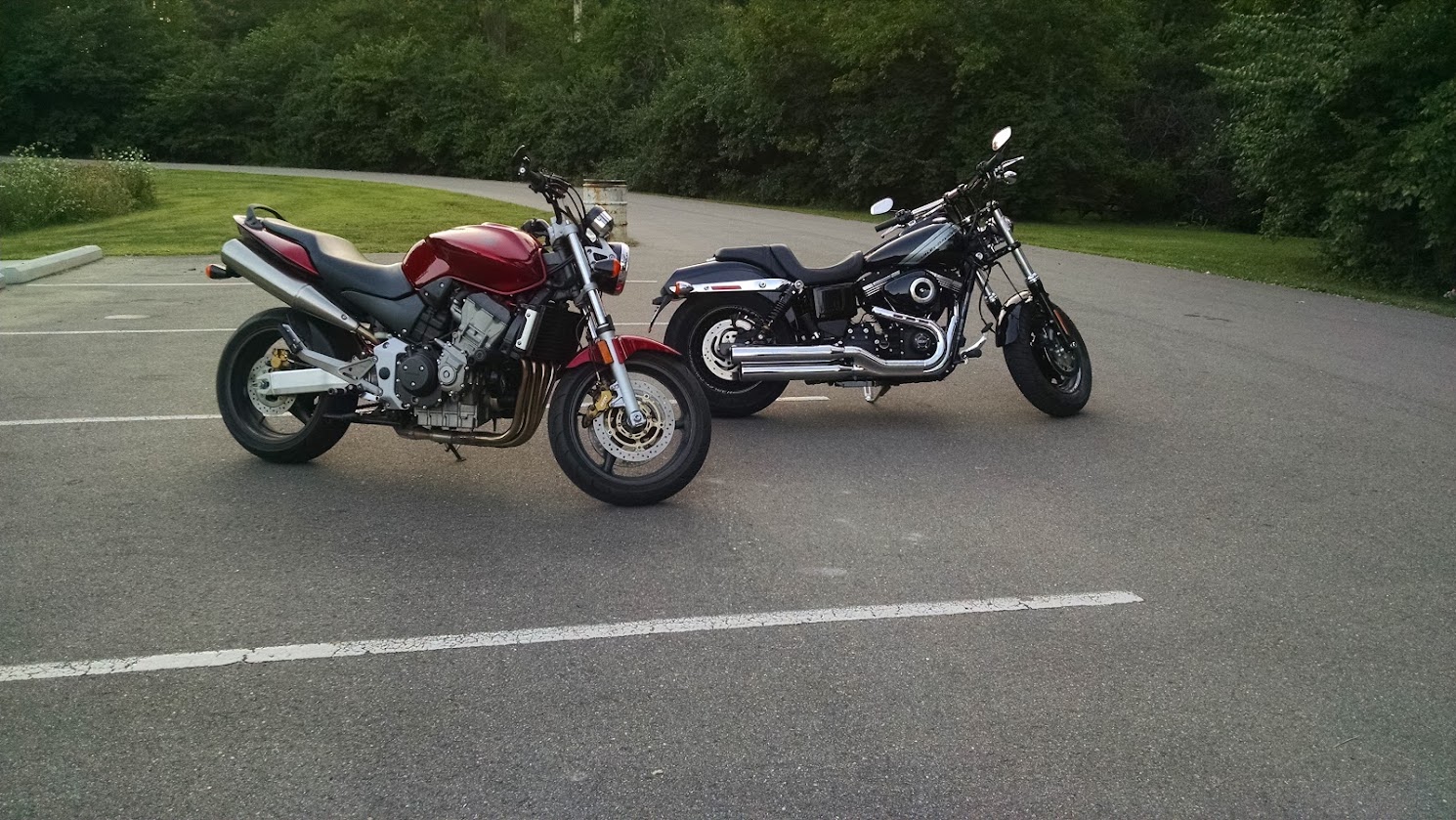 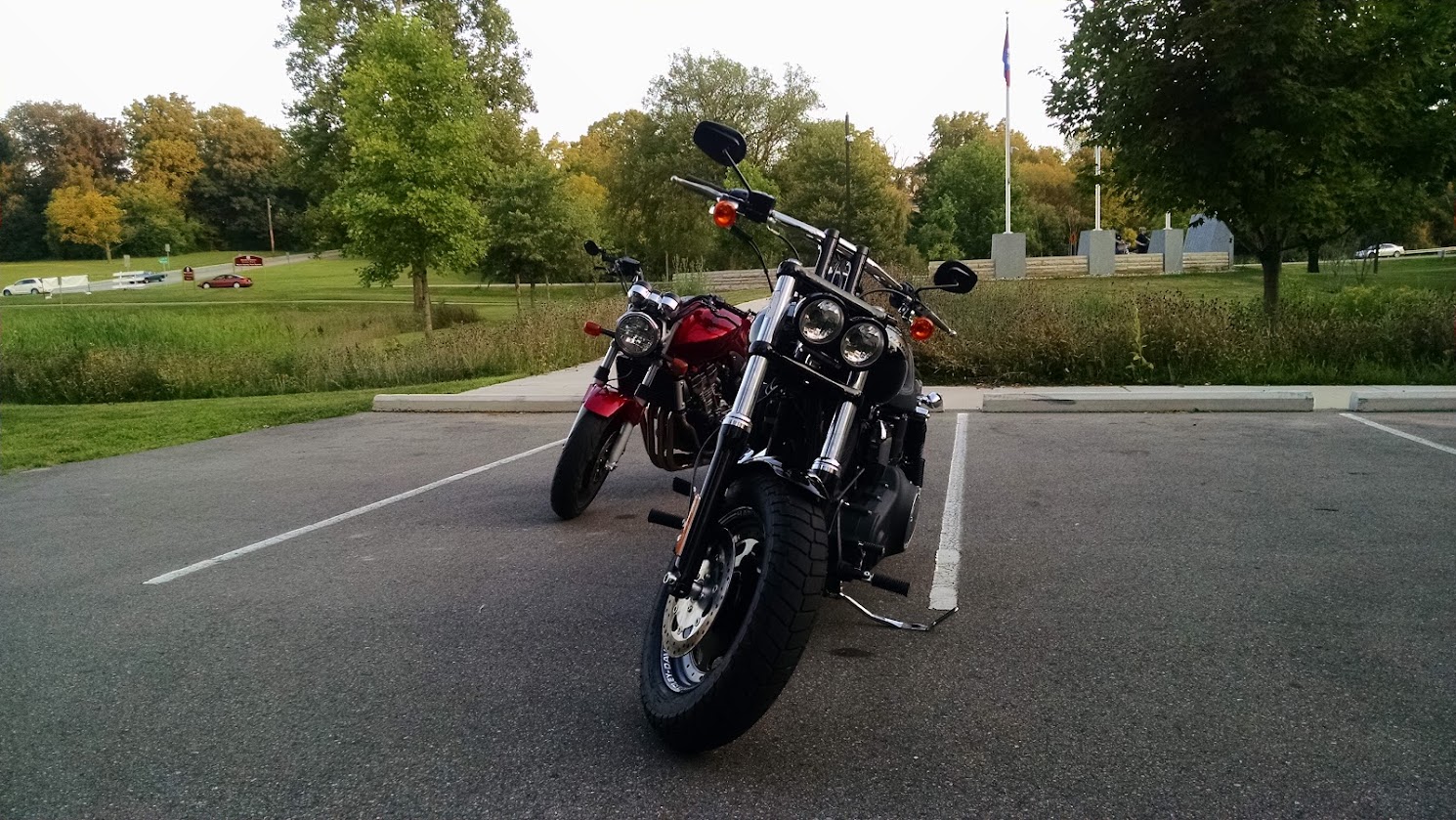 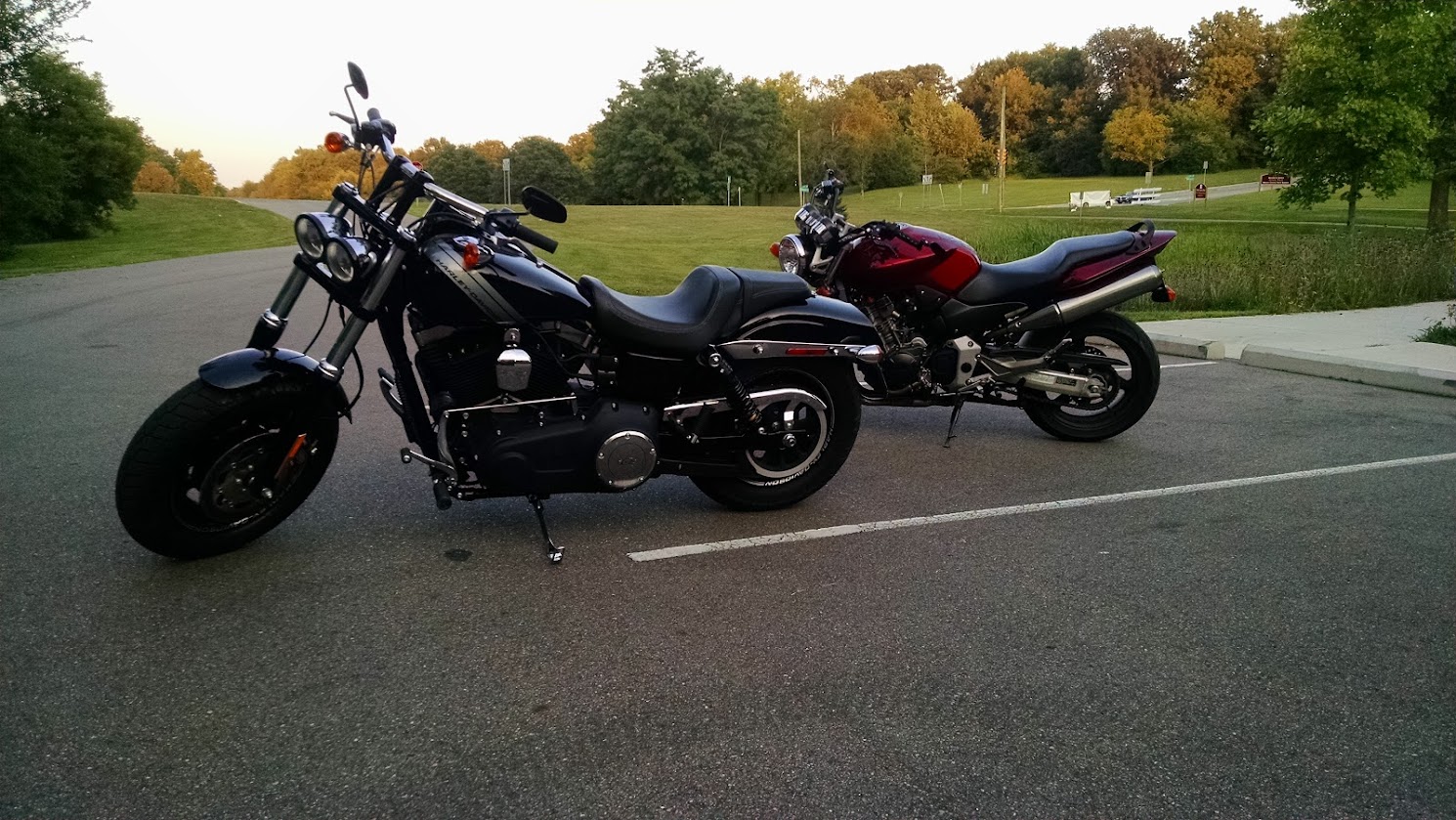 All said and done we probably covered about 115-120 miles with our side and it was a nice bit of riding for one day. I'd definitely recommend the roads we used because outside of a few miles of Territorial, all of the roads were pristine, which is hard to find in Michigan. Id definitely recommend this route to anyone looking for a nice relaxing day trip with a good mix of terrain and nice places to take a pit stop and refuel both ride and rider.

The only damper on the day came at the very end of the ride after we took these pictures. We were pulling into a park off Edward N Hines that had a dirt and gravel circle drive. My buddy was just about to stop and as he was putting his foot down, he turned the bars a bit and used the front brake. The bike slipped and tipped over doing just more than a crawl. He was able to jump out from under it, so he wasn't hurt, but he easily could've blown out his ankle if the HD fell on him. Much cursing ensued and the HD had a scraped up crank case cover along with some nicks on the mirror and blinker, but not too much other than that. The important thing I stressed to him was that it could've been worse and he wasn't hurt, but it was still a reminder that things can go wrong pretty quickly when you're being careless. We had switched bikes about 15 minutes earlier and had just switched back prior to pulling off, so I was quietly thankful that it wasn't my 919 that took the spill.
DSB_ESQ is offline
Quote Quick Reply
post #2 of 6 Old 08-17-2015, 03:59 PM
Dave W.
Philanthropist

You are a better man than I am.

I will admit, It is a nice looking HD.

Good reminder that the ride to Hell is worth taking! I've yet to do that.
Sorry to hear about your friend's drop. I bet the rental folks weren't real pleased with him! What did you think of the Fat Bob? Any idea what a day's rental with insurance cost him?
I've always been under impressed with Hines Drive. To me it's more of a place for local families to go for picnics. (And lots of gravel in the parking areas.)
Mark919 is offline
Quote Quick Reply
post #4 of 6 Old 08-19-2015, 01:21 AM
Sniper
(Quintus) Pilus Prior

I saw a Harley the other day that looked almost like one of the old Buells, but I don't think the one your bud rented is it.
Sniper is offline
Quote Quick Reply
post #5 of 6 Old 08-19-2015, 08:05 AM Thread Starter
DSB_ESQ
PB

Join Date: Oct 2014
Location: Birmingham
Posts: 217
Rep Power: 1
So the rental actually wasn't that bad. He had to put down about a $1,000 deposit (insurance would cover any damage beyond that) and the bike itself was $150 per day. The rates go down the longer you rent, but as he said, it's worth it to him to get to ride and decide what he wants for about $200 all said and done.

Riding the HD was interesting. Feet are forward but at least it has pegs instead of foot plates. The engine has gobs of torque and you hold gears for a long time. The weirdest part for me was not having a tach and the fact that I had to use my entire left hand to pull the clutch all the way into the grip to shift. In terms of a HD look, I liked that the Fat Bob has big sidewalls and chunky tires. I saw one with a 2-1 black ceramic exhaust and sand paint job that wasn't that bad. Not my cup of tea, but I can at least understand the appeal.
DSB_ESQ is offline
Quote Quick Reply
post #6 of 6 Old 08-19-2015, 02:06 PM Thread Starter
DSB_ESQ
PB

Join Date: Oct 2014
Location: Birmingham
Posts: 217
Rep Power: 1
Update: Buddy was only charged $210 for the rental. They didn't ding him for any damage. His quote, "A very valuable and relatively inexpensive lesson learned."
DSB_ESQ is offline
Quote Quick Reply