I Tried Again . . . .
My last attempt at the Bun Burner Gold was in December 2013. Due to construction and holiday traffic and a closed 24hr gas pump in Deming NM in the wee hours of the morning when it was 20f I had to settle for the standard 36 hour version. Work has been crazy so a destination ride was out of the question and I didn't even have time to give my new aux fuel cell a proper shakedown. It had to be a there-and-back ride in 24 hours and the "there" turned out to be a little place called Angie's Restaurant in Fort Hancock Texas not quite 800 miles away. I planned to leave Saturday morning 5/14 but again work got in the way. I really didn't like the prospect of doing an Iron Butt ride Memorial Day weekend but that was my next and only window of opportunity - until my lovely wife said "why don't you do it Monday? Go for it!" So off I went. With my new found range I planned gas stops every 200 miles or so and at the 199 mile mark I ran out of gas. The cell was still full even though the transfer valve had been open a good half hour. But when I popped the cap on the primary tank I could see the fuel flowing from the cell. Must be a venting issue. I stood there on the shoulder peering into the filler until there was enough to make it to the next station. Oh did I mention the rain? Not a deluge by any means but a steady rain prevailed from Beaumont all the way to Schulenburg. 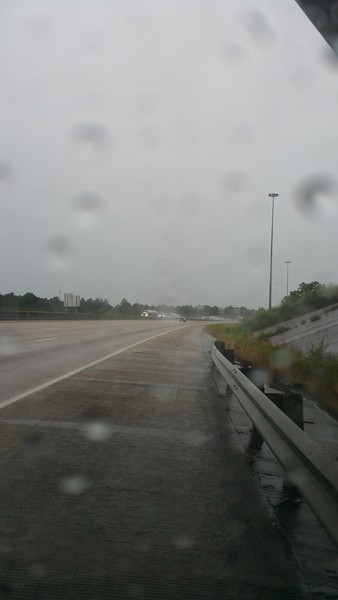 After the rain cleared I took my spare key and rode with the cap open so fuel would transfer. I made it to Ft Hancock about 40 minutes ahead of schedule. 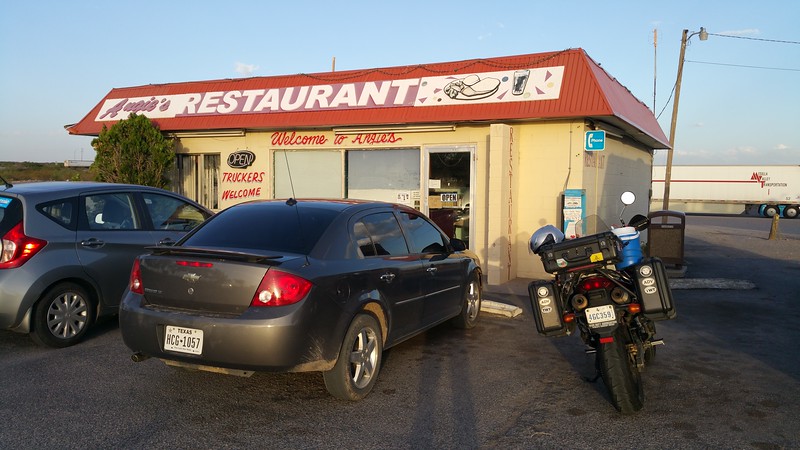 Back in March I posted in the "post something funny" thread about a man named Steve Diederich, the first to ever complete a 250cccccc Insanity ride. I met him on his 5th coast to coast pass and he had me participate in his little Grey Poupon vignette. Hilarious!

So of course I had to keep it going.

After that (it really was a great burger) I went next door to gas up and while inside waiting to pay a State Trooper approached me and said, "Is that your dog?"
Me: "What dog?"
Trooper: "On the motorcycle."
I didn't say it but I was thinking, "There's somebody's dog on my motorcycle?"
Trooper: "On the phone."
Me: "Oh - oh yes, that's my dog."
Trooper: "He's nice."

I headed east toward home. As I approached San Antonio I realized I had fallen about an hour behind schedule which must have been caused by a combination of fatigue and gas fumes. Faced with more rain and Houston morning traffic there was no way to make up the time. There never is. Hopes dashed I whipped into a Motel 6 and caught 4 hours of shuteye. The rest of the ride home was uneventful. I could have pushed on and sat in rush hour traffic and possibly made it back in 26 hours but there's no points for that and I'd rather live to try again. So I settled for another standard Bun Burner, by my odo 1,625 miles in 31 hours. Now I've got until the 1st week of July to iron out the tank venting issue and I'll try again. Next time it will be Beaumont TX to Cheyenne WY via Las Cruces NM in <24hrs.

And here's the fuel cell.

Quote:
Originally Posted by theboom View Post
I honestly have no idea what any of this means

It means he has a few screws loose but hes still worth keeping around!....

This is awesome!
My parents made a non-stop blast to and from ND to San Antonio on his wing; he pulls a trailer with a boat fuel cell in it. My mom reads, and my dad has a 2' straw in his sippy cup so he never even had to take his hands off. They are a little loopy sometimes

« what kinda helmet lid do you wear usually? any recommendation? | I owned 101 for 2.5 hours today »