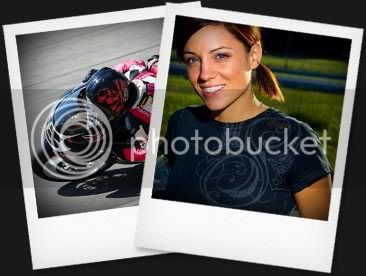 
Ready to mix with the best in the world, Melissa Paris is set to make her debut in the FIM Supersport Championship at Miller Motorsports Park, May 29-31.

"Being invited to compete in this event is an incredible honor," says Paris, who will pilot a Markbilt Yamaha R-6. "This will mark the first time World Supersport has run in America and being part of the festivities is awesome. Miller Motorsports Park is a state-of-the-art racing facility and I think we have an excellent chance of finishing well."

In her first year of professional racing Paris is competing in selected AMA events, the USGPRU 250GP and as many other races as budget permits. Already this season, she has earned accolades for scoring the best finish by a woman in Daytona 200 history, beating over 50 competitors in the first Daytona 200 and she currently sits in second place in the USGPRU 250GP with just two races completed.

"Miller Motorsports Park is my favorite track," continues Paris, who hails from San Diego, Calif. "I absolutely love competing there and it certainly suits my style of riding. I took a win in the USGPRU 250GP at the end of last year and also scored a Podium finish in the 125cc class."
Follow Wrist Twisters on Facebook and Twitter
Lash is offline
Quote Quick Reply
post #2 of 7 Old 05-13-2009, 07:29 PM
TLR_Nate
Living the dream

she tried to steal my synthetic lube at daytona once, it was awesome : )
+ $5

No offense to her or any female racers.... But it is time to step up!
When Zalusky was getting all her press,.... she was one of the nicest people at the track, but an also ran. She even got to compete on waivers when she failed to qualify. Kawasaki was giving her all the equipment, so I can't blame it on that either.

When the R6 I had listed in the classifieds towed her around VIR (with Travis at the controls) to teach her the track... Well, it kinda says something.

Everyone on the track needs to earn their way on the track. And I mean EARN it. Travis could not qualify for the AMA race, but Zalusky, who is over a second slower gets a spot on the grid. Hmmm....

--I do not know this woman and I hope for her sake she does awesome in World competition.
Virginia Beach Remodeling

Join Date: Jan 2006
Location: San Diego, CA
Posts: 1,246
Rep Power: 1
I agree with you on Zalusky. Nice lady but never put up the results. Yeah she is faster than me but who cares. You still have to hit the time to qualify no matter who you are.

When I was helping a friend race AMA he had to bust his a$$ on shagged tires to qualify. She was "technically" on the bubble and still made the grid.

Melissa is now on a good team but that came from working her way through WERA and WINNING races in USGPRU. She ran the AMA Grand Nationals at Mid-Ohio in 2007 and did very well. She was getting some help then from Celtic racing.

She did good at Daytona this year and beat a lot of other racers. She could try and use her husband to get stuff but totally works hard and earns her own deals. I hope to see her do well not cause she is a girl but because she is a good rider and an American representing the US on the World Stage. I will be cheering for her during the Utah round.
www.waveloch.com
TLR_Nate is offline
Quote Quick Reply
post #6 of 7 Old 05-15-2009, 11:10 AM
2ohno

+1 more on Jessica - suepr cool chick, but, not as fast as she should be to be racing with the big boys - having said that ,she is WAY faster than I will ever be !

Melisa, now there is a different story - Mulit Time GPRU champ and good results thus far this year -http://www.melissaparis.com/schedule-results.php
Anyone who can finish the 200 in the top 20 is fast in my book -
2ohno is offline
Quote Quick Reply
post #7 of 7 Old 05-15-2009, 12:45 PM
tarheelguy
NC Sasquatch

I passed Zalusky at VIR, on the gas after the esses, this was a few years back.

It was her first time seeing VIR, she did a TPM day to figure the place out before the AMA round.

After lunch it was quite a different story.

Melissa Paris will surprise quite a few of "the Guys" later this month.
tarheelguy is offline
Quote Quick Reply